Alright , hello folks and hope you guys are doing great. This is our first post on the Animation and Art School Goa production blog and we are really excited . The idea behind this blog is to put up the whole production process and talk about the ideas and approach to the work. And off course all the fun stuff we bumped into during this process .What we have here is an animation dialogue assignment done in our school and we would like to go through the whole production process of how this animation piece evolved from script to screen. When i was going through some dialogue clips to animate them, bumped into this really nice high energy audio clip and right there a small piece of idea was born.

After listening to it for hours, had to come up with few concepts to cook up a story for this particular clip.With lot of iterations, finally came with this story of a guy who has been tied up to a chair with an explosive about to explode under his butt . So he is panicked and abusing roger(the off screen character) for leaving him to this miserable state. 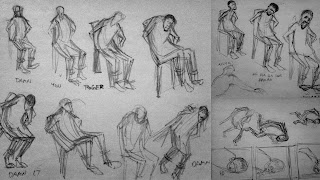 Once the story was approved i wanted to quickly doodle the the camera angle and the acting elements i had in my head. So these rough sketches would give me visual clues to act out the shot in front of the camera for video reference.

Aaaah! video referencing is  my favorite element in the process of animating. It provides with so much of ideas to approach a shot and its like a bag of acting choices one can pick and play with. For me the best part about acting in front of the camera is not that i would get all my poses and acting from it. But it does give me enough information to build the shot further and exaggerate in my head while i am animating. I don't like to put every pose from my acting piece and make it look real. It like the art of caricature. Keeping the character intact you play around the exasperation part.  Here are the first fewer takes out of some hundreds. AND YES I WAS TIED UP LITERALLY FOR THIS SHOOT!

Enough of the bad acting already. Lets move onto animation

For those have been in this 3d animation industry are familiar with this workflow. For those who don't , we follow a certain workflow to progress step by step along a shot so that considerable changes can be made when you get reviews from your mentor or director. Also it gives you a clean approach to the shot with a great learning curve along the way. First stage is the layout stage where we set the scene before jumping into animating. Once the layout is set the race begins. Blocking is my favorite part of the whole process for two reasons. One being the idea is so fresh you just cant stop the enthusiasm within to make this piece entertaining. Secondly its like good old 2d days where the key animator draws all storytelling poses before passing it to the IB artist.  Since its 3d we don't draw, we carefully pose the characters like puppeteers keeping all the drawing elements in our head . The idea in blocking is to hit all the accents and phrases so that these would serve as the strong foundation for the scene. Also it does give your director enough information to know where you are heading with the acting and storytelling. And a good director is very important to make something look good to great. You ask me why? Because he is full of surprises and i shall show it to you along the way.

So i was pretty satisfied with the blocking and acting choices. Just wanted to move ahead with the shot . In post blocking stage i wanted to add all the inbetweens ,secondary breakdowns and favoring poses . I added the sub acting elements like sub accents ,little head shakes and worked on the overall timing so that i should n loose the energy of the shot at splining stage. Also i love to add details in the blocking phase itself before the EVIL MAYA can take over my scene and make it look lame.

Aaah! See i told told about Maya taking over my scene. It did happen even though i thought i had given my best in the post blocking stage. MAYA is like evil witch who is hungry for frames. You give her space in the timeline , she eats it all. So an important tip to all fellow students is never let software control your animation . You control the software and tell exactly what it needs to do. And  MAYA being a women she s more cranky (No Pun intended). Alright so in the first pass we start splining and yes ,This is when you will meet your best buddy The Mighty GRAPH EDITOR . And sometimes he is a life savior especially when you need to delete a chunk of your animation and re animate the scene. My first pass was a little floaty and timing was loose as you can see below.

After watching the lame first pass had to tighten the timing and remove all the loose ends. This is the phase you go into detailing which is actually a painful process which you have tons of controllers with many key frames to handle. But yeah one gets used to it after animating for some time. I did work on the lip sync and the facial animation to see how the performance is coming out on the screen. Also was testing out with the breathing. So after days of cleaning up i ended up with this piece.

This is the phase where i thought i am at the end of the race . So i tweaked more and added all the little things that we missed out during second pass. And yeah one big change i made into the scene was tweaking the camera angle for the close up shot. Made is more lower and tighter and gave just enough breathing space to achieve the intensity of his desperate attempt to break free from that chair. Also pushed all the poses. Added over shoots , moving holds and worked on the facials so that i can go and party for completing the scene.

BUT ......Something happened ( Thunder and lightning in the background)

Remember i was telling about directors being full of surprises. I gotta see one. When i thought i had finished this piece of animation and showed to it my director, He said ' Now it looks like a animation assignment but we need to turn it into a shot from a movie'. And there came a whole new level of upgrades . The whole scene layout was changed. Instead of him tied up in a room, he is now tied up in a corner of a ship. All the ship elements was modeled , textured and matte painted. Added the camera animation for the ship. Animated secondary objects like bottle, ropes, fuse and animated the light. Then the vfx of sparks and smoke was added and the scene was lit. The best part was the sound design process. Added all the sound fx . The environment, sound fx of all the elements on the ship and the character sounds.We had so much fun and i remember we laughed the whole night when we are recording the spit sound at the end.Then i was awe struck of how a simple dialogue shot can turn into a movie shot.

Different styles of lighting tests were done and finally we choose the third one. 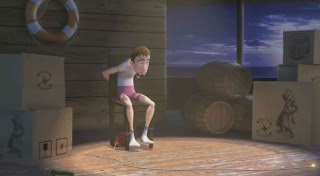 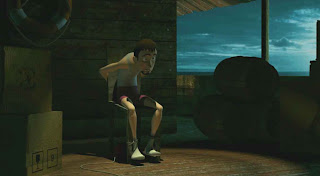 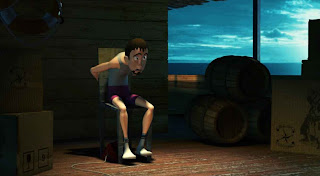 
So here is the final one after one hell of a journey. Really loved the whole process and had loads of fun doing it. Hope you guys enjoyed the clip and the production diary. See you folks on the next making of.

Special thanks to Josh Burton for this incredible Morpheus Rig

Posted by Animation and Art school goa at 06:13